Mr Wallace asked me if I could make a copy of a plaque found at The Scar Viking Boat Burial. He is an Orkney man and was intrigued by the plaque which is made of Whalebone and has been carbon dated to between 875AD and 950AD. 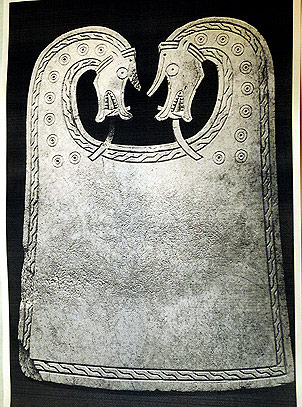 It is one of Orkney's most important archaeological finds of the 20th century and came to light on the island of Sanday after a fearsome storm in 1985.

It was an interesting commission which I enjoyed making. The size is actually quite small about A4 in fact, so cutting out around the heads of the Dragons did present a few challenges. It really made me appreciate the skill of the original Viking craftsman who made it!

Several cups of coffee later the outline is cut out on the scroll saw. I even managed to cut around the little bumps on the snout of each one.

The edge design looks complex but is in fact fairly easy to do once you get the hang of it.

I didn't make an exact copy which would have had to be distressed much more.

Sycamore was the ideal wood for the project and I chose some with a very straight grain. 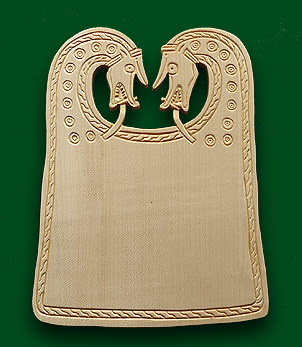 This is the finished plaque which Mr Wallace was very pleased with.

I think it could be the basis for a stunning cheese board if made much bigger and from thicker wood. I'm open to offers if anyone wants to commiision a truly unique present.

Hi Steve, We just wanted to write and thank you firstly for managing to complete our order in the limited time we gave you, and secondly for producing such a beautiful bread board.